Progress on my woodworking project to build a media center has slowed, but is still moving along.

Both the left and right tower cabinets are assembled and have face frames installed.  I expanded both the height and width of the media center towers so that a larger TV could be accommodated  as well as more space for storage.  The towers are nearly 7′ tall and 24″ wide.

Lots and lots of sanding.  The maple plywood just requires a light sanding at 220.  The solid maple face frames take a little more time.  I’ve been starting at 120 and working my way up to 220. 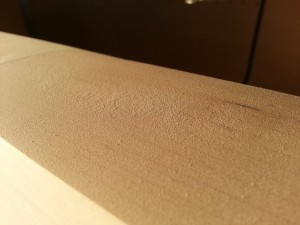 Here’s the two tower cabinets side-by-side.  Space in the garage is now at a premium.

Each of the tower cabinets have two drawers on the bottom.  You can see the drawer slides in the picture above.  Each drawer is approximately 18.5″ wide and 12.5″ deep.  We’ll probably use these drawers for storing BluRay’s and XBox accessories.

The first drawer is almost done, 3 more to go build.

I decided to use dovetails since my wife bought me a new Porter-Cable dovetail jig for Christmas.  After spending some time setting up the jig and calibrating my router, I was ready to make some dovetails.  My first two attempts didn’t go so well.  After tweaking the jig a few more times, I finally dialed in the right settings.  It’s a great jig, and I’m anxious to build these drawers and then try it with some other projects.

Back in October, I began a new woodworking project to build a media center for the living room.  Currently, my college entertainment center (designed for a 36″ CRT TV) serves as the only storage in the living room, and currently doesn’t do a great job.  It’s time for something better.  After looking around for plans, we finally picked this media center from Woodsmith #194:

The next question…what kind of wood to use.  After seeing similar units in stores such as Pottery Barn and Crate & Barrel, the darker finishes really appealed to us.  Since I have a garage full of walnut, this was my first choice.  I quickly found that walnut plywood was too cost-prohibitive.  Instead, I settled on building this with maple, since I also have a lot of that as well.  I spent some time working on a dark finish:

Once I found a good dye/glaze combination that achieved the dark finish, it was time to make some sawdust.  I started making the center console.  The plans allowed for a 55″ TV, but knowing me, I wanted to be able to support an even larger TV.  By increasing the width of the center console, this unit should allow us to have a 65″ TV in this media center.

Making the center cabinet went by really fast.  It features inset doors, which was a first for me.  It also feels two pull-out drawers for easy access to all of the electronics, and ample space for heat dissipation.   I plan to mount a high-grade power strip and gigabit ethernet switch for all of the components that require ethernet.  In the end, I will also be mounting some LED strip lighting inside the case as well, to make it easy to see inside the cabinet.

The inset doors were easier than I expected.  Mounting the doors with the euro-style hinges was also easier than I thought it would be.  It was also a first for me to use drawer slides for the two component trays.  That part was also easier than expected, and the slides work great.
Once the center unit was complete, I moved on to build the bridge unit that will sit above the center console.  The bridge unit was a fairly easy build.  Simple box construction, face frames, and a top that allows for a crown molding detail.

Here’s the Center and Bridge console together.

In the next post, I’ll share some pictures of the two tower cabinets.  I have started to make some progress there as well, and I’m anxious to get both of the tower cabinets complete as well.  I can’t wait to bolt this unit together to see it all as one.

In the past few years, I haven’t been able to do much woodworking.  My tool time was limited to several DIY projects that had higher priority.  This spring, I took a day off from work to build this Cedar Potting Bench.

I started with plans from The Family Handyman magazine.  The plans were for a 47″ wide bench, but the area on our patio was more like 65″ inches.  I decided to widen the bench to give more table top and shelf space.

With the added width, I was concerned about the structural integrity.  I was able to modify the plans by adding a middle vertical support for the back of the bench to add some additional strength.  Without this vertical support, I believe there could have been some sagging with the shelves.

The plans called for using a plastic wastebasket to hold the dirt.  Another change was to use cement board instead of exterior-grade plywood to hold the dirt container.  By cutting a hole in the plywood, the container hangs from the bench by the lip of the wastebasket.  I could not find exterior plywood, but I found that cement board (used in tile applications) worked just as well.

Construction was primarily Gorilla glue with exterior screws.  Some pocket screws were used as well.  I used Behr transparent stain/finish to protect the cedar from the elements.  Shelf brackets from the local big box store were used to support the shelves.

This was a really fun project, and was a great way for me to get back into woodworking.  Next project will be an Entertainment Center for our living room.